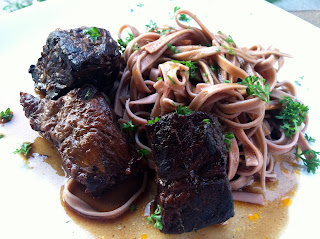 Amy writes: Chris is not a fan of short ribs, something which I just can't understand. What is there not to love about braised meat that is so tender and succulent that it falls right off the bone? Cooked in the right braising liquid, and these cheap cuts of meat become flavorfully restaurant-worthy. After our day on the Connecticut Wine Trail, I wanted short ribs braised in red wine. Chris would just have to deal.

I turned to Around My French Table, by the French food guru Dorie Greenspan (we've met!) for guidance. That book is my current end-all. If you don't have it yet, you should definitely buy it. And then join French Fridays with Dorie. But I digress...  Dorie (we've met, so I can call her by her first name, right?) has a recipe in that book called "Short Ribs in Red Wine and Port." Yeah, I thought, that's what I want. 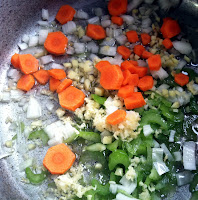 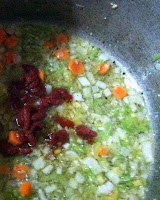 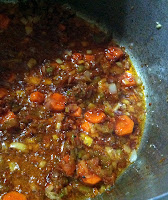 I followed her recipe as closely as I could, since I had way fewer short ribs (1 1/2 pounds versus the recipe's nine!), and I was missing a couple of ingredients (port, for example). Plus, I played with the measurements and left off the gremolata. We did follow Dorie's advice and made these one night ahead, leaving them refrigerated in the braising liquid overnight. I think that's a pretty important step. I had bought this great red wine pasta by Rossi Pasta a while back and thought that would go perfectly with this. So, on Sunday night, we had Red Wine Short Ribs and Linguine.

Get your herbs together -
parsley, thyme, bay leaves, rosemary, and star anise

Open some French wine and have a glass

Then put the herbs and some wine into the pot

We shared a bit with our neighbor, B. First she heard our foodie-like description, then she looked at it and said, "We call this beef and noodles in our house." But after she tasted it, she thought it was pretty schmancy. Chris took one bite and said, "I never knew short ribs could be so good." Yeah, Dorie Greenspan rocks. 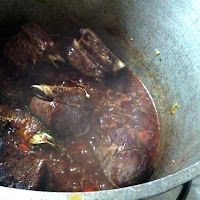 Close the lid tightly, put it in the oven and leave it alone.
No peeking for two hours.
Then uncover it and cook it another hour, still undisturbed.
Let the whole thing cool then put it in the fridge for a day. 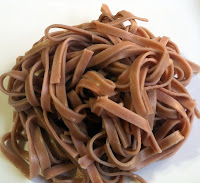 Make your side dish, strain and reduce the sauce, warm the short ribs, and...

I could give you the recipe, but that would be against the rules of French Fridays with Dorie, and although this post is not an official FFwD post, I'd rather you go buy the book. It's worth it, I promise. And no, I don't get anything for saying that. 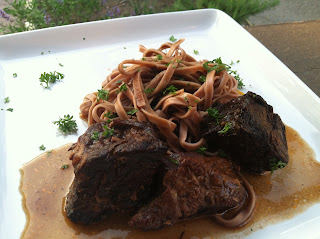 I adored Dorie's short rib recipe, so this looks amazing over linguine.

Those look amazing. I can taste them from here. Reminds me that I need to do some again. Thanks for sharing.