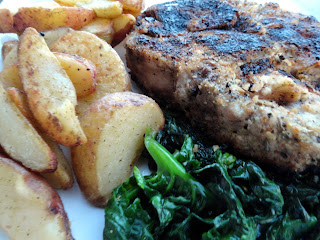 Since you are one of A Couple in the Kitchen's readers, you know that we are pretty big on cooking from scratch. But sometimes the "busy-ness" of life just drags you down and all you need is good food fast. As part of the Foodbuzz Tastemaker Program, we received a coupon for a free Alexia Foods frozen food product (we chose their "Oven Reds"). We stopped at the market today, after a particularly busy day, to pick them up. Those, a package of on-sale pork chops, a bag of spinach, and a couple of pantry items is all we needed to make tonight's 25-minute meal (take that, Rachel Ray!), "Italian Pork Chops served with Alexia Oven Reds and Garlic Spinach." 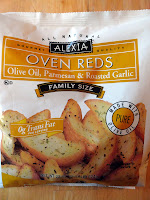 We took a good look at the potatoes once we opened the package. They looked like what they claimed to be, which were wedges cut from "Columbia Basin" red potatoes, and seasoned with olive oil, parmesan cheese and roasted garlic. We could vaguely catch the scent of the cheese and garlic, but then again, they were still frozen at the time. We preheated the oven to 425, as directed, and spread them out in a baking pan. That part was done. 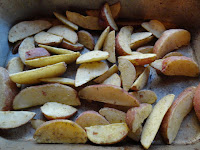 We allowed the potatoes to cook for 10 minutes and then started to prepare the rest of the meal. First, we seasoned some plain breadcrumbs with Italian seasoning (you could skip this step by using Italian-style breadcrumbs). We placed those in one shallow bowl; in another, some flour; in a third, an egg beaten with a little water. Into the flour, then the egg, then the breadcrumbs, then into our heated cast-iron pan went our chops. Three minutes on each side, then into the oven with the whole pan. There were five minutes of cooking time left.
Now, for the greens. We heated some olive oil in a saute pan, added most of our bag of spinach, and crushed a clove of garlic into the pan. By the time the pork and potatoes were done, so was our spinach, and all that was left to do was plate the meal. Everything was done at the same time, and all of it done in 25 minutes (the suggested time for cooking the potatoes), from start to finish.
Our verdict on the potatoes? They are pretty good, particularly for a quick-and-easy frozen food product. We do have a couple of criticisms, however. First, we would have liked them to be crisper on the outside (which may be possible with longer cooking time). And second, they were a little bland, so more cheese and garlic flavor would improve the taste. Still, we applaud Alexia for putting out a tasty, all-natural (yes, we recognized AND could pronounce each ingredient) potato product that makes a busy day that much easier.
Italian Pork Chops served with Alexia Oven Reds and Garlic Spinach 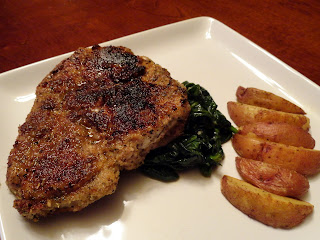 Ingredients:
1 bag Alexia Oven Reds
2 pork chops
kosher salt and freshly ground black pepper
3/4 cup plain breadcrumbs
2 tablespoons Italian seasoning
1 cup all-purpose flour
1 egg
1 tablespoon water
2 tablespoons olive oil, divided
1 bag spinach
1 clove garlic, minced
Preheat oven to 425. Spread the potatoes in one layer on a baking sheet and cook according to package directions. Relax for 10 minutes, because you deserve it and because the rest of the meal only takes 15 minutes to cook. Season pork chops with salt and pepper; set aside. Lay out three shallow bowls. In one, mix together the breadcrumbs and Italian seasoning. In another, place the flour. In the third, beat together the egg and water. Heat one tablespoon of olive oil in a cast iron pan over high heat. Dip each side of each pork chop first in the flour, then in the egg wash, then in the breadcrumbs. Carefully lay the pork chops in the hot pan. Sear for 3 minutes on each side, then place the entire pan in the oven. Heat a saute pan with the remaining tablespoon of olive oil. Add the desired amount of spinach and minced garlic. Toss over heat for 2-3 minutes. Remove potatoes and pork chops from oven and serve with spinach.
Disclaimer: Through the Foodbuzz Tastemaker Program, we received a coupon to try one Alexia frozen food product for free. The recipe in this post, all opinions, and the photos, are our own.

Your chops sound so good, I must try them.

Such a delicious dish! Those potatoes look yummy!

These chops look amazing! The whole meal does!