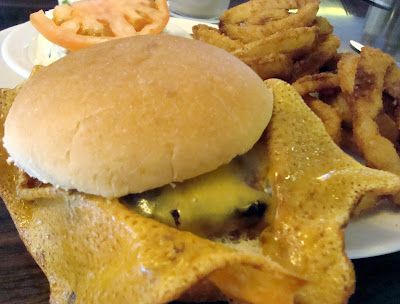 Every neighborhood needs its burger joint, you know, that place where you can have a good lunch real cheap.  We folks in Manchester are lucky enough to have ours, Shady Glen, in not one but two locations. We recently visited the original, which opened on the Manchester/Bolton line in 1934, and found several reasons why it is still in operation.

First, as we enter, we must keep in mind the protocol for waiting: there are two lines, one of which forms to the left for those who wish to be seated at a booth, and one that forms to the right for the counter-sitters.  We almost always choose the left, as it leads tantalizingly past the fourteen-foot freezer full of perfect, round, handpacked half-gallons of homemade ice cream.  But we're getting ahead of ourselves.
The various menus consist of boards and signs on the walls and several are located around the perimeter, giving us something to think about while we are in line.  Offerings are of the basic lunch variety – soups, salads, sides and sandwiches.  Platter versions are available at a higher cost for they include “a buttered roll and choice of two sides: french fries, cole slaw, tomato and lettuce, or cottage cheese.” That says it all. 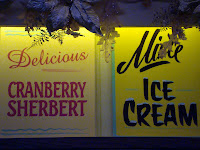 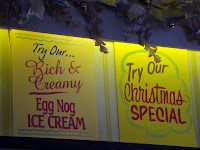 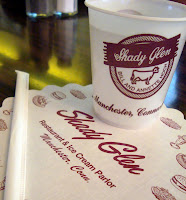 The atmosphere is reminiscent of earlier days, with waitresses in green dresses with frilly white aprons, and cooks dressed in white with maroon bowties, black belts and shoes, and white paper hats.  The service here is no-frills, but very friendly and efficient.  When we are seated at last, the waitress places Dixie-Cups of water in front of us; they boast the name of the restaurant and proprietors with a little drawing of a brown cow.  Since we've been staring at the menus on the wall for the last ten minutes or so, we are able to place our orders right away. 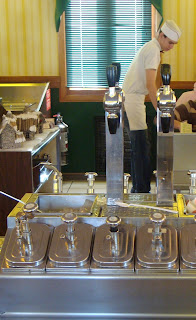 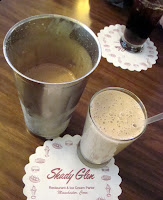 Shady Glen still makes their own sodas the old-fashioned way, with flavored syrups and soda water, and Amy decides on a vanilla cola.  It is sweet and bubbly, and way better than the version Coca-Cola puts out.  Chris gets his favorite, a chocolate malt shake, and it is thick and frothy. Then comes our plate of Shady Glen’s famous fried cheese.  Slices of American cheese are placed in a frying pan with a little pat of butter and cooked until the sides curl up and the cheese is melted in the middle while still slightly browned and crisp.  Four slices of this delicious cheese are served on a bed of lettuce with a pickle slice.  This is the same cheese that comes atop their cheeseburger - more on that later. 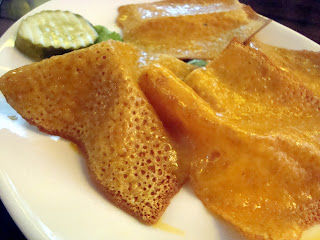 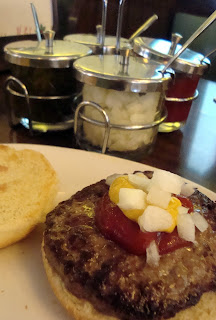 For Amy's meal, she gets a plain burger and fries, and Chris chooses the cheeseburger platter with fries and slaw. His is topped with that crispy cheese that looks like wings under the top bun but is at the same time gooey and melty where it hits the meat. The server also brings over a covered condiment tray with bowls filled with ketchup, mustard, relish and chopped onions.  We dress our burgers and take big bites.  They are juicy and taste like a good burger should, the toasty bun adding just the right touch.  The fries and onion rings are crisp and not greasy, with the perfect amount of salt. The slaw tastes fresh and creamy, with good crunch in the cabbage and carrots. Although this is definitely not the healthiest lunch we’ve eaten lately, it’s definitely the tastiest. 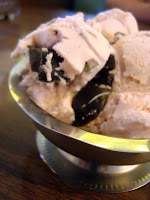 But the best is yet to come, as Shady Glen makes its own ice cream right there on the premises.  They offer classic flavors like chocolate, vanilla and lemon sherbet, alongside more unique ones such as banana chocolate chip, grape-nut and orange-pineapple.  There are also seasonal offerings, and since it's the holidays, they proffer cranberry sherbet, mince, egg nog and something called "Christmas Special" which Amy can't resist. Although it is pink, it has a light almond flavor and is filled with Dubonnet-soaked black, green and red cherries as well as chopped toasted almonds. Sooooo good. 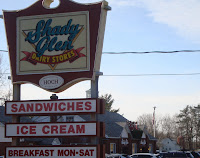 A neighborhood gem for breakfast, lunch and/or an ice cream outing for two, Shady Glen is also a great place for families.  It has been featured on Food Network's The Best Thing I Ever Ate and on Road Food, among others, making it a destination spot for those who aren't lucky enough to live around here. There are two locations in Manchester, at 840 Middle Turnpike East, (860) 649-4245, and at the Manchester Parkade, 360 Middle Turnpike West, (860) 643-0511.  Believe us, the cheese alone is worth the trip from wherever you are. Be sure to take cash, as they do not accept cards.

what a cool place--I love that they have retained a lot of that old fashioned feel. that fried cheese, though, looks really dangerous!

The fried cheese is to DIE for!

I have been going there for over 50 years, love the place

Sounds delicious!! I'd love to sample myself through their menu!

Nothing can top a really good burger. Its amazing that the cheese curls up the way it does. And homemade ice cream on top of all that...heaven. Happy New Year!

Been eating there since the 60's. Best cheeseburger and cole slaw on earth

Burgers are phenomenal and the minestrone soup is out of this world.