We have just returned from an awesome weekend in Atlantic City which included a visit to the Atlantic City Food and Wine Festival. There were festival events all weekend, but the only one we attended was the signature event of the festival, The Grand Market and Italian Village.
While the process of getting into the event, even with pre-purchased tickets, was chaotic to say the least, the tasting itself was fantastic. There was a maze of ballrooms at Bally's dedicated to the event, in which there were over 125 tasting stations featuring small plates, wine, beer, specialty food products and cooking demonstrations. There was so much to taste, it would be impossible to taste it all! However, we thought we'd offer you a taste by highlighting some of our favorites from the festival.
One of the first stops we made was to Simply Naked wines, not only because they were stationed near the entrance, but also because their eye-catching display included male and female models with whom you could take a photo. Very Atlantic City. These were delicious, straight-forward wines that are made without aging them in oak. This process makes it easier to taste the varietal itself; Amy loved the fruit-forward Cabernet Sauvignon and thinks Joanne would [heart] the unoaked Chardonnay. 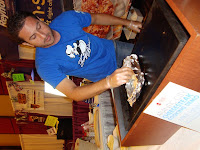 Across from the Simply Naked station was a cooking demo given by the enthusiastic and personable Mike Hawk of Tony Baloney's who was being sponsored by Reynold's Wrap as the winner of the 2010 Cheesesteak Battle. He showed us how to make his Atlantic City Smoked Cheesesteak on the grill using Reynold's Wrap Non-Stick Foil (we received a roll in our swag bag). For this cheesesteak, sirloin is cooked in stout beer with an intriguing mix of seasonings including mustard seed, allspice berries, cumin, fennel, coriander and paprika, and is then topped with smoked mozzarella. How good does that sound (and look)??? 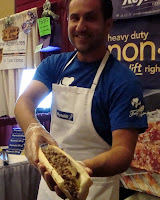 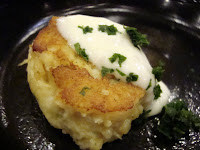 A small number of the other food highlights included this nicely seasoned, full of lump crab, fabulous crabcake offered by Phillip's Seafood, 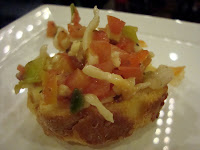 this crunchy bite of bruschetta topped with sweet juicy tomatoes and tangy cheese, 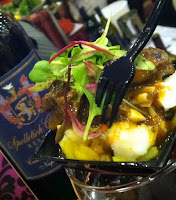 and this complex, delightfully shmancy dish of grilled steak and poached lobstertail over saffron risotto. 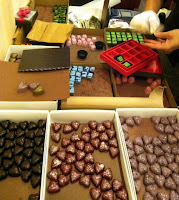 In the specialty food products category, we fell completely in love with 2 Chicks with Chocolate, who were offerings tastes of their ﻿"Spice Tiles" (milk chocolate blended with cinnamon, clove, ginger, nutmeg and cayenne) with port (fantastic pairing, indeed!), as well as their amazing caramel blends. Their owner, Elyissia Wassung, was attentive and personable, encouraging tasting after tasting, and answering questions with patience and enthusiasm for her products. We purchased a box of the tiles, some of their "Fire and Ice" cocoa mix (frozen chocolate martinis, anyone?), and a box of their luscious, velvety caramels, of which the rosemary lemon (top row, below) is quickly becoming Amy's latest addiction. Thankfully, they are available online! 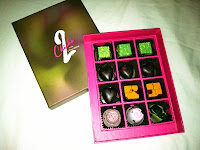 There were plenty (and we mean, plenty!) of wines to taste, and we tried as many of them as we could. One that really stood out was Zenaida Cellars' ZC Red, a ﻿luscious blend from Paso Robles that had fruit and spice notes as well as excellent mouthfeel. We'll be looking for this wine for sure!

One non-alcoholic drink we loved was Jin-Ja, an herbal tonic made with fresh ginger, cayenne, lemon, mint, green tea and a touch of sugar. This drink had bite! And, it is purported to bring quick hangover relief. (We're happy to say that we didn't need it the next morning.)
As foodies and oenophiles flocked into the ballrooms, there was a general feeling of gaiety and comraderie. We were all here for the love of food and wine, and it showed.  We met plenty of great people, and the chefs seemed to love being showered with our attention. Here is a photo of Chris with Tony Luke, a legend in the world of Philly Cheesesteaks. 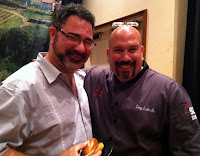 All in all, we had a great time. It was a lot of fun being among other foodies, trying all the delicious foods and wines, and being introduced to ﻿products that were new to us, or even new to the market. We may have to make this an annual event! 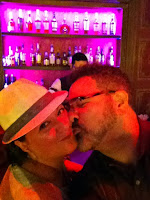 I love food festivals!! Thanks for sharing this one- I totally want to check out the Jin Ja thing it sounds yummy.

I am a regular visitor to Atlantic City but I have never made it to the food festival. After seeing this post I have to put it on my to do list. This part would be the only thing I would have interest in. Thank you for the tour.

What an awesome festival. I looks like you had a wonderful time :)

ooo Im so jealous! I would have loved to have gone to the Atlantic City Food and Wine Festival!! that crab cake looked great!