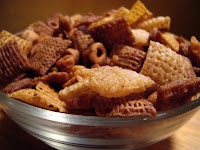 Amy writes:
When I was a kid, one sure sign it was the holidays was the large tin of homemade Chex Mix on the counter. It didn't stay on the counter long, however, but once that tin was close to empty, you could count on smelling Chex, butter and various seasonings baking in the oven at any minute. We were in need of a constant supply.

Over the years, I have refined my taste for Chex Mix and thus, the family recipe has slightly changed to meet these preferences (or, what my friend Joanne calls, Amy-Approved Ingredients). No nuts or pretzels in my mix! (I like them, just not mixed in with my Chex). It's cereal only, specifically Wheat Chex, Rice Chex, Corn Chex and Cheerios in equal amounts. The seasonings are also very specific and no substitutes are allowed. To me, and other members of my family (who will remain nameless to protect their identities), Chex Mix is Christmas crack. Each batch (which is actually a double-batch) contains three sticks of butter. Yes, you read that right. Therefore, finally realizing admitting that my favorite holiday snack is probably accounting for any holiday weight gain I might incur, this year, I've made some rules regarding my own personal Chex Mix production and consumption.

Rule One: The earliest that Chex Mix can be made is the day after Thanksgiving.
Rule Two: After New Year's Day, any remaining Chex Mix must be tossed.
Rule Three: Not more than one (double) batch can be made in any given week.
Rule Four: Chex Mix must be eaten in a little bowl rather than directly from the tin.
Rule Five: Whenever possible, gallon-sized bags of Chex Mix must be offered as gifts to friends and aforementioned family members.

Ah...Chex Mix. Salty. Crunchy. Garlicky. Full of that savory, almost meaty, flavor that is known as umami. Licking fingers coated in butter and bits of cereal. Chewing on Cheerios that are dark brown, shrunken little circles of deliciousness. Ah, heck. It's the holidays! I deserve a treat! Besides, it's just cereal, and cereal is healthy - whole grains and all that! Note to self: must get to nearest grocery store, buy more cereal. And butter! Need butter! Bring over that tin! Hey...hands off my Chex Mix!!!


Note: I credit my mother for the original recipe from which I adapted this, and have no idea where she got it from. Also, remember, this makes a double batch, so make it in a large roasting pan. And, finally, no substitutions. And no, I haven't been paid by any of these companies.

Heat oven to 250 degrees. In a large roasting pan, melt the butter. Mix in seasonings and worcestershire sauce. Fold in cereal slowly until all of it is coated with the seasoned butter. Bake at 250 for 1 hour and 15 minutes, stirring every fifteen minutes. Increase oven temperature to 275 and bake for an additional 15 minutes. Allow to cool and store in an airtight container. Try to share.

Disclaimer: Through the Foodbuzz Tastemaker Program, Lea & Perrins sent us a coupon for a free bottle of their Worcestershire sauce which we used in this recipe.

Oh boy, I LOVE Chex mix! I'm a little nervous about the three sticks of butter though :)

Good luck with that.