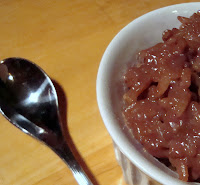 Amy writes: School (note: we're both high school teachers) has been, well, let's just say hectic and leave it to our readers' imaginations. When things are this way, we tend to order a lot of takeout and today our refrigerator was full of takeout containers, pizza slices wrapped in aluminum foil, and some things that were unidentifiable. Thank goodness it was trash day. One thing we saved, however, was that extra pint of white rice that came with our General Tsao's. That was destined to become dessert.
When things are hectic, the sweet tooth (teeth?) in each of us appears with a vengeance. Knowing this, while Chris was late coming home from school, I decided to use that leftover rice, mix it with cocoa powder, milk, a dash of this and a bit of that and created what I'm now calling Aztec Chocolate Rice Pudding. I'm not going to lie - it's pretty good for an experiment, and it certainly has a kick to it (next time, a little less cayenne for sure), but it worked. It worked well, in fact. Sweet, spicy and chocolaty - an interesting little pudding that isn't the most beautiful thing but sure hit the spot.
Note: This recipe filled four ramekins.
Ingredients:
2 cups low-fat milk
1/3 cup granulated sugar
2 tablespoons cocoa powder
1 vanilla bean, split in half lengthwise
2 cinnamon sticks
1/2 (next time definitely 1/4 but it's up to you!) teaspoon cayenne pepper
2 cups cooked rice
Heat all ingredients except the rice in a medium saucepan over medium heat. Stirring often, cook until bubbles start to form on the edges of the pan and the milk begins to steam. At that point, remove the cinnamon sticks and the vanilla bean pod. Then add the rice and bring to a gentle boil. Reduce heat to low and simmer for 20 minutes until thickened, stirring often to avoid burning. Chill and serve when things are hectic.
Posted by Amy at 5:34 PM

This looks so good! I love the idea of adding heat to chocolate. And what a perfect end to a meal with General Tsao's.

My sister will love this recipe! I am just going to have to make it for her. Thanks so much it looks great!

What gave you the idea of rice for this treat?

I had the rice leftover from some takeout and decided to try it.

THIS LOOKS LOVELY. WE HAVE SIMILAR ONES HERE SO I'M SURE THIS WILL APPEAL TO ALL HERE. THANK YOU!

who can resist at this one delicious, sweet, tasty and amazing pudding, so yummyy :D