The Mill at 2T

Sublime. My writer/friend Joanne once warned me about using this word, for overuse can make it less meaningful (think of the word "awesome"). However, sublime is the only word Chris and I can think of to describe the food at The Mill at 2T, a charming yet sophisticated little restaurant located in a historic mill in the Tariffville section of Simsbury, CT.
On the advice of foodie and writer Mary Ellen Fillo, we were already there when they opened in order to snag two of the six seats at the counter overlooking the tiny, open kitchen. There are seven tables in the dining room, but the counter is definitely the best seat in the house. Owner/Chef Ryan Jones and his co-chef Chris were gracious hosts, starting up conversation and patiently answering questions while maintaining a zen-like calmness that a fan of Hell's Kitchen wouldn't be able to recognize. 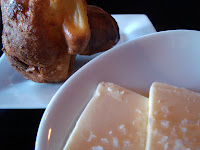 The restaurant filled up quickly, even at the early hour. Our friendly server promptly filled our water glasses and delivered two airy, eggy popovers with salted butter. The menu, which changes daily, was small but had an excellent variety - there were chicken, beef, pork, fish, and vegetarian entrees from which to choose. 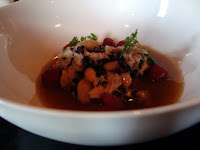 But first, appetizers. Chris started with the rabbit stew. While the chef humbly pronounced it "one-dimensional," we thought it was superb. The rabbit was melt-in-your-mouth tender, and the ratio of meat to beans to broth was spot on. Red raspberries were an unexpected and imaginative garnish. 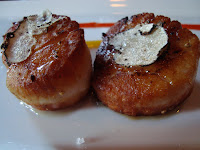 My appetizer consisted of two George's Banks scallops that were perfectly seared to be caramelized on the outside and juicy and tender on the inside. Two sauces - one honey-sweet, one red-pepper-spicy - played off each other well, and the shaved black truffle on top balanced the seafood with a luxurious earthiness. 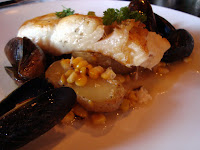 For his entree, Chris chose the pan-fried halibut with steamed mussels in jalapeno-lime beurre blanc broth. The halibut was dusted with seasoned flour and cooked to a perfect flakiness. The spicy sweetness of the broth really highlighted the salty mussels and the light fish without diminishing either one. A bit of smoked corn and a couple of fingerling potatoes rounded out the dish. 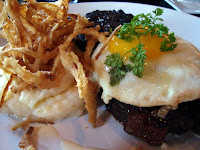 I chose the strip steak topped with a hen's egg, with a side of whipped potatoes topped with crispy onions. Juicy, flavorful, well-seared on the outside but exactly medium-rare, this was one heck of a steak made even better with the creamy egg yolk running onto it. The potatoes were fluffy and salty, and the onion straws, sweet and crunchy. We ate slowly so as to take in the show of the chefs working their magic. 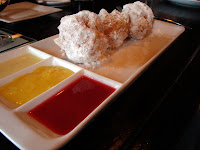 For dessert, we shared the trio of homemade ice cream - black currant, cappuccino, and truffle butter flavors - and the house specialty, brioche donuts. The truffle butter ice cream was definitely different, but my favorite was the cappuccino. The brioche donuts were similar to beignets, only a bit more doughy, and were served with a trio of sauces - strawberry, lemon, caramel - for a sweet variety.
Chocolate-dipped "2T cookies" arrived with check and were a nice treat for later that night, since we left extremely full, deliriously satisfied, and with every intention to return again and again. This place deserves every single accolade it has been getting. Truly sublime.

I think I may be drooling...It does sound sublime! Tuscan bean soup--as good as it could have been that night--not so much. An appropriate use of the word indeed. Brava! xo

I totally thought the scallops were bread pudding. But now that I know they are seafood, they still look amazing. The brioche doughnuts look lovely too.

We also had dinner here, back in October--this has got to be one of the best places in CT.....you can see my review on our site!