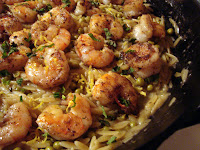 When we saw real, Alabama Gulf Shrimp on sale at our local supermarket, we started thinking shrimp dishes. Amy has had a soft spot in her heart for Gulf Shrimp ever since her New Orleans days, and let's face it, the taste and freshness are superior to imported. That's just a fact. There are a lot of shrimp pasta recipes in our repertoire, but we wanted something new. Amy's sister Kate, a Pampered Chef representative, suggested this recipe from their cookbook 29 Minutes to Dinner. Sounded like a good weeknight plan, so we decided to give it a go.
First, we knew we could easily eat a pound of shrimp between us, so we had to make a few adjustments, and our adapted recipe is below. Doubling the amount of shrimp meant doubling the seasoning for the shrimp. Also, a miscommunication between chef Amy and shopper Chris meant we only had canned peas, and although they are our favorite (Le Sueur), frozen would have been better - more green color, less mushy texture. Nonetheless, we liked this one-skillet meal enough to make it again sometime. Perhaps we'll substitute the peas for spring asparagus, maybe add a bit more lemon and mint. There's an idea...
Cook's note: we used a cast iron skillet
Ingredients:
1 pound raw Gulf Shrimp, peeled and deveined
1 tablespoon cooking oil
1/2 teaspoon salt
1/2 teaspoon ground black pepper
1/4 teaspoon sugar
1 cup orzo pasta
1 garlic clove, pressed or chopped finely
2 cups chicken broth
1 cup clam juice
1 tablespoon lemon juice
1 tablespoon lemon zest
1 tablespoon thinly sliced fresh mint ribbons
1 cup peas
1 tablespoon butter
Heat oil in a large skillet over medium high heat. As oil heats, combine salt, pepper and sugar in a Ziploc bag and toss in shrimp to coat. Arrange shrimp in a single layer over bottom of skillet and cook about one minute until one side is browned and edges are pink. Turn shrimp and cook other side until centers are opaque and shrimp are cooked through. Remove shrimp from skillet and set aside. In same skillet, combine orzo, garlic, chicken broth and clam juice. Stir well and bring to a boil. Reduce heat to medium low and cook 10-12 minutes, stirring often, until orzo is cooked through. Remove skillet from heat and stir in peas, butter and lemon juice. Arrange shrimp over orzo, cover and let stand 3-5 minutes or until heated through. Sprinkle with lemon zest and mint before serving.
Posted by Amy at 5:49 PM

Sounds like a perfect weekday dinner! A treat, but not too much work.

I'm glad that you enjoyed it! There are two volumes of the 29 Minutes to Dinner available. If anyone in interested, please visit my website at www.pamperedchef.biz/kateskitchen7, or e-mail me at kiczuk7@msn.com! Enjoy the shrimp!

I have made this many many times!! It is one of my favorites. Quick and easy and delicious!!!