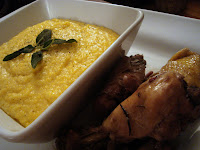 Pollo Canzanese. Chicken in the style of Canzano (a town in the Teramo province of Abruzzo, Italy). We found this recipe in an ancient computer file of Amy's, copied and pasted into Word, perhaps from Mario Batali on The Food Network, or even from Chef Anna Teresa Callen, as they are quite similar. The one was actually followed was Mario's, although we used four drumsticks and four thighs (no butcher's work tonight!) and left off the parsley altogether. You can rarely go wrong with one-pot dishes, so this served our purposes on the Sunday that marked the (sigh) end of February vacation. 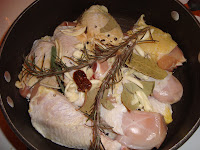 It's a strange little dish, to be sure (photo above is before adding the prosciutto and wine and cooking). The odd mix of ingredients and the brown-grayish color the chicken turned after braising could have been a turn off, as it was to the recipe raters on Food Network, apparently. However, once the house filled with the delicious smells (herbs! garlic! wine! cloves!), we set our fears aside. We left the so-called "sauce" in the pan - it never really reduced and so was quite watery and had all those cloves in it after all - and served the chicken pieces and prosciutto bits with a side of sage polenta. The chicken was falling off the bone tender, even after only 35 minutes in the pot, and it had great flavor and depth. Unlike the recipe raters, we'd give it three stars, not just one. However, the polenta was the real star of the night (with respect to Mario, of course). It was creamy, it was herby, it was buttery and cheesy. We especially liked how it picked up the sage in the chicken dish. To sum up, it was delicious, and here's our recipe:
Ingredients:
1 quart water
2 teaspoons salt
1 cup coarse yellow corn meal
3 tablespoons unsalted butter
4 fresh sage leaves
1/4 cup grated Grana Padano cheese (Parmegiano would work well also)
salt and pepper to taste
Add the salt to the water and bring to a boil. Slowly whisk in the polenta and cover. Cook over medium-high heat, whisking often, for 45 minutes, until the polenta is thick and creamy. In a separate small saucepan, cook the butter over medium heat until it just starts to brown and smells nutty (about four minutes). Add the sage leaves to the butter to infuse the butter with flavor. Fry the sage for about a minute, turn off the butter, and set the sage leaves on a paper towel to dry. Stir the sage butter and grated cheese into the polenta, then season with salt and pepper to taste. Garnish with the fried sage leaves.
Posted by Amy at 2:44 PM

If there's polenta, it's bound to be good.