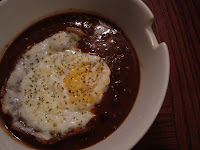 Place 2 tablespoons olive oil, chopped onion and minced garlic in a soup pot. Turn the heat to medium, season with salt and pepper to taste, and cook until onions are softened, about seven minutes. Add the chili powder and ground chipotle and cook, stirring constantly, for one additional minute. Add the broth and the beans. Bring to a boil, then lower heat and simmer, stirring occasionally, for 45 minutes to an hour. To thicken, blend briefly with an immersion blender. When ready to serve, heat the remaining tablespoon of oil in a skillet over medium-high heat. Add the eggs and fry to your liking (note: we did them over-easy so the yolk would mix nicely into the soup). Add the lime juice to the soup, stir well, and remove from the heat. Serve the soup in a bowl topped with the fried egg and sprinkled with a teaspoon of dried cilantro leaves.
Posted by Amy at 1:38 PM

This looks like a great breakfast to eat all day long. Before moving to Texas, I would have been appalled by the idea of beans for breakfast, but they're so filling, lots of protein, and so tasty that now I'm hooked.

I love black bean soup! Must try with the egg topping.Sounds really great for that breakfast for dinner craving.