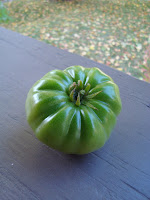 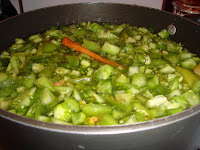 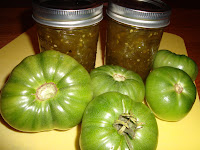 Last weekend brought temperatures in the thirties and forties with a couple of snow squalls dropping large white flakes from the sky. Yes, it's a bit early for all that, but we do live in New England after all. The chill in the air destroyed our previously bountiful basil plants (so sad!), thus prompting us to get outside and harvest the remaining herbs and vegetables in our garden. And by vegetables, we mean the two dozen or so green tomatoes that were still clinging to the vine. A friend happened to stop by during our task and suggested we make green tomato jam - that's what his grandma used to do after all. And so, after some research and deep thoughts, we bring you the great green tomato jam of 2009, a three-day experiment.

The jam turned out surprisingly sweet, but at the same time savory. It was a bit thin at first but set well after being refrigerated. Next year we plan to try it with different spices, and work harder to eliminate the seeds. Overall, though, we're quite happy with the results of our experiment, and proud to have this product, made from our own home-grown tomatoes.
Note: This recipe yielded six 8-ounce jars.

Wash and dry tomatoes then dice them. In a large bowl, combine the diced tomatoes, sugar, and lemon juice. Cover with plastic wrap and refrigerate for 24 hours.

The next day, pour the tomato mixture into a large pot. Add the cinnamon sticks and cardamom pods. Bring to a boil, then lower heat and cook for 10 minutes, stirring occasionally. Allow to cool, pour back into the bowl, cover with plastic wrap and refrigerate another 24 hours.

The third day, remove the cinnamon sticks and cardamom pods from the mixture. Put the tomato mixture through a food mill in small batches to eliminate some of the seeds, breakdown the skins, and smooth out the mixture. After milling, pour the tomato mixture into a large pot. Bring to a boil, then lower heat and simmer for 30 minutes, stirring occasionally. Put the jam into clean, sanitized jars immediately and seal them. Immerse the filled jars in boiling water for 15 minutes. Remove them carefully and allow the jars to sit overnight. Refrigerate after use.
Posted by Amy at 6:06 AM

Amy, I've never worked with green tomatoes - will have to see if I can get some. Cheers