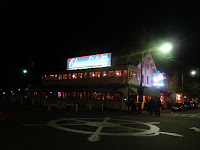 Claudio's is the oldest same-family-owned restaurant in the United States. It was opened in 1870 by a former whaler in the town of Greenport, New York on the North Fork on Long Island. From what we could see last Friday night, the family has kept the restaurant going successfully by maintaining a beautiful Victorian building and serving up fresh, local seafood (and more) at great prices.

We came to Long Island by ferry, and after checking into our weekend's lodging, took the short drive into town for dinner. We found Claudio's on the water, near the docks, with plenty of well-lit signage to guide us there. The first thing we noticed was the gorgeous Victorian bar, reportedly salvaged from a New York hotel in 1885. Our imaginations immediately went to work: standing at the bar were Long Island elite, Gatsby types, stopping in to imbibe in a glass or two of illegal spirits during Prohibition, or America's Cup sailors fresh off their yachts coming in to snack on freshly caught, shucked oysters. 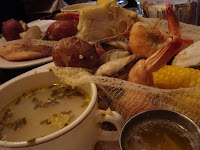 We did a little bit of both ourselves. We started by ordering a bottle of one of the many local wines, choosing a Cabernet Franc from Bedell Cellars, a wine we enjoyed enough to seek out the winery the following day. We stayed local for the rest of our dinner as well. Wanting to taste from the local waters, we ordered a raw bar sampler. Eight each of Peconic Bay littleneck and cherrystone clams, eight oysters caught from various farms on the North Fork, and four wild (Pacific) jumbo shrimp were served up atop chiseled ice on a large platter with lemon and cocktail sauce. All were exquisitely fresh and delicious. For our entree, we could not resist getting "Claudio's Friday Night Bake" (see photo). For a mere $21 each, we got a thin mesh net full of king crab legs, jumbo shrimp, clams, mussels, steamers, corn on the cob and red potatoes steamed in a wonderfully garlicky broth. How can you beat that?

Gorged on fabulously fresh, well-prepared seafood, we passed on dessert and took a walk around downtown Greenport thinking what a beautiful little place we've discovered! As for Claudio's, we'd recommend it. What could easily have been a cheesy tourist trap in fact was a great dinner served in a romantic setting with a touch of history to make it that much more interesting.