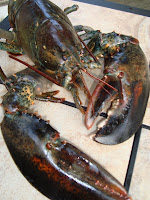 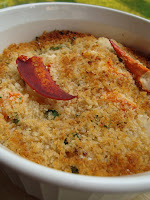 It was Saturday night. We just returned from a peaceful, relaxing week at the beach in Maine with two four-pound lobsters in a cardboard box marked "perishable" and big appetites from a long afternoon's drive. After quickly bringing in all of our luggage, Chris put salted water in the turkey fryer/seafood boiler to boil and I got to work prepping dishes, lobster crackers, paper towels, and butter. We steamed the ginormous crustaceans for about 20 minutes, let them cool, and went to work releasing the succulent meat from its hard red shell. When we were sated, we realized we had plenty of lobster leftover so we wrapped it carefully, put it in the fridge, and started to think about what to do with it before falling into a food coma on the couch.

Then it was Monday night. Earlier that afternoon we received in the mail Jessica Strand's cookbook Cooking for Two and while flipping through it, saw a recipe for "Split Broiled Lobster with Lime Butter and Celery Root Remoulade." We hadn't yet been food shopping, but we did have lots of leftover lobster, a garden full of fresh herbs, some butter and a lone lime in the fruit drawer. We decided to make what we're calling "Lazy Lobster Leftovers" with the two tails, two claws, and bits of knuckle meat we have. This is our recipe, adapted from Strand's. It was an easy, decadent meal with a summery citrus zing, and it put our leftovers to great use.

Preheat oven to 350 degrees. Cut the lobster meat into bite-sized chunks and place in a casserole dish. Set aside. In a small saucepan, melt 3 tablespoons of butter with the sliced garlic. Remove the garlic as it starts to become fragrant and before it begins to brown. To the melted butter add the panko and stirring, cook over medium heat until the panko begins to look toasty. Add the parsley, salt and pepper, give another stir and turn off the heat. Spread the butter and breadcrumb mixture over the lobster meat and bake for 15 minutes. Melt the remaining butter with the lime juice and drizzle it over the top of the breadcrumbs. Broil for three to four minutes and then serve with a fresh garden salad.

This is an interesting way to have lobster. Very rarely do you see it like this. Nice recipe.