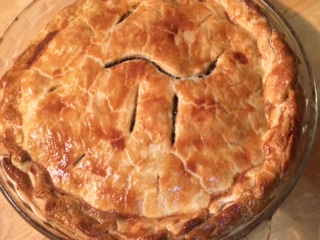 Happy Pi Day, everyone! While Mr. Science Chris likes the symbolism behind 3/14 (or 3.1415....), Amy just looks forward to eating pie. And being French Canadian, she's always wanted to try Tourtiere, especially after seeing this recipe in Saveur. 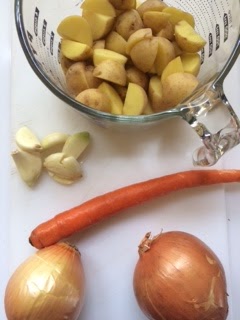 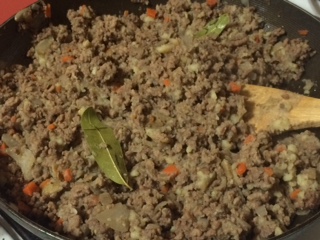 We made a couple of adjustments to the Saveur recipe. For instance, since it was a weeknight, we used store-bought pie dough. We also tried a mix of ground meat - 2 parts pork to 1 part beef. We forgot to buy apple cider, so we put 1/4 cup of apple cider vinegar into the cooking meat instead. And what we ended up with was a very interesting dish with lots of layers. It was definitely hearty, with all that meat and potatoes, but it also had beautifully warm spice flavors such as cinnamon, nutmeg and ginger. And the aroma of this meat pie cooking? Just right for a cold, damp Monday afternoon. No wonder they eat this in Canada! 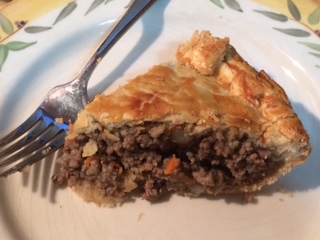 Tourtiere
Adapted from this recipe from Saveur

Lay the bottom pie crust in a 9-inch pie plate and set aside. Bring a large pot of water to boil, add salt, and boil the diced potatoes until they are tender. Mash and set aside. Heat the oil in a large skillet. Add the pork and beef and cook until no longer pink. Add the garlic, onion, and carrot, and cook, stirring often, until meat is nicely browned and vegetables are soft, about 10 minutes. Stir in cider vinegar, celery seed, cloves, ginger, cinnamon, nutmeg and bay leaves. Continue to cook and stir until liquid is evaporated. Stir in mashed potatoes, season with salt and pepper, and allow mixture to cool completely. Preheat oven to 400F. Place the filling into the pie plate, smooth the top and cover with the top crust. Fold the crust under itself and crimp together with your fingers. Brush with the beaten egg and place in the oven. Bake for 50-55 minutes, until hot and golden brown.