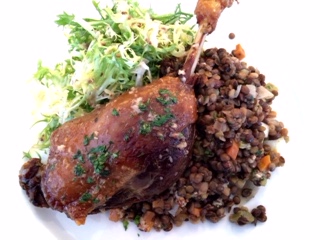 Snow was falling softly on the sidewalk but it wasn't accumulating. Indeed, it was making things rather picturesque. So New England-y. I had taken a half day off of work for a couple of doctor appointments. The kind of appointments women have to do, and should do, annually. They are not fun appointments, like massages or mani-pedis. But they are necessary. And I am of the opinion that when you have to do something you don't really want to do, you should give yourself a reward. Instead of thinking of it as a chore, think of it as something to celebrate.

And so I found myself in between the two appointments, which I had purposely scheduled for the same day, with plenty of time to take myself to a beautiful lunch. My second appointment was in the West end of Hartford, and as I am a big fan of classic French cuisine, I decided to (finally!) check out Avert Brasserie on LaSalle Road. My reward. 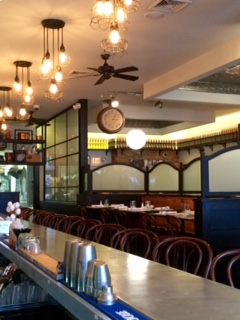 The decor certainly evokes the streets of Paris, with charming light fixtures, exposed brick, and a zinc bar including the requisite stand of hard-boiled eggs. The ambience affirmed that I had made the right choice - I felt special here, having a grown-up lunch by myself in the middle of the day (yes, the clock was wrong...). It's the simple things, after all.

I started with a champagne cocktail and my server brought over some thick slices of crusty, chewy baguette with a luxuriously smooth, slightly salted butter. I decided to keep it old-school and chose the onion soup for my appetizer. It was full-bodied and tasty, with lots of caramelized onions beneath a crisp, melted topping of Comte cheese. A perfect start. 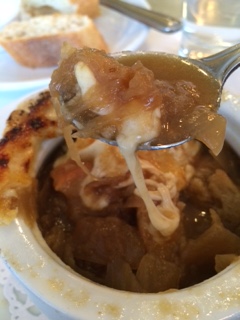 I had a much harder time deciding on my entree, as so many classic favorites appear on Avert's lunch menu: Moules Frites? Beef Bourguignon? Coq au Vin? Oh, who was I kidding. I was getting the duck - Duck Leg Confit, to be exact. The very well-balanced plate was served with green lentils and a frisee salad with a warm shallot dressing. The frisee was slightly bitter, but a touch of mustard seed in the dressing brought a pleasant pungency to each bite. The lentils were sweet and smoky, with a hint of spice that I couldn't quite place, but it very well could have been cinnamon. They sat atop a bed of diced green apples which offered a delightful crunch and sweetness. The duck was the star, though. That one perfectly confited duck leg had rich dark meat that was falling off the bone, crispy mahogany-colored skin, and none of the grease or oil that confit often has. I was in heaven, and I ate every bite, leaving nothing but bare bones. 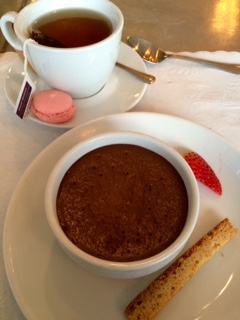 My server suggested that I finish with a pot de creme, and I agreed with him; he's the expert after all. The dense, velvety pudding had deep chocolate flavor that paired so nicely with my last sips of Cote du Rhone. I knew my second appointment was ahead, so I also got a pot of tea, which came with a pale pink strawberry macaron. I ate that, too. I was full, but satisfied and happy with myself. I had another half hour to kill, so I walked around West Hartford Center, window-shopping and breathing in the cold winter air. With a lunch like that as a reward, I almost look forward to next year's appointments. Almost.