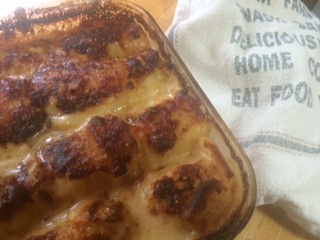 For some time now, Amy has been fascinated by Hasselback potatoes. They just look so fancy, so elegant, as if they took several hours, a few expensive gadgets, and a sous chef or two to create, when really all you need is a sharp knife and a steady hand. Careful patience and precise seasoning generates this rather impressive side dish that elevates even the simplest meat with which these potatoes are served.

Hasselback, or "accordion" potatoes, are so named because they were invented, way back in 1700's, at the Hasselbacken restaurant in Sweden. Medium-sized potatoes are sliced only most-of-the-way before being roasted, thus creating the unique look and wonderful texture (crisp on the outside, soft on the inside).

Ours was not quite as lovely, and we think it's because we ignored the warning that we might not need all the cheese and cream mixture and threw it all in anyway. 'Cuz that's how we roll. Next time, maybe we'll listen. Maybe not.

Get the recipe here. 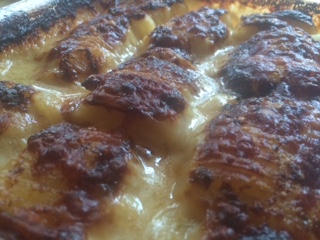