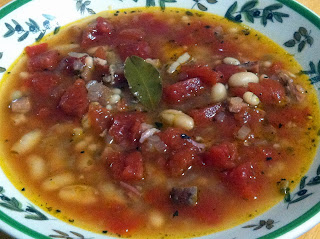 We attended an Oktoberfest celebration thrown by friends C and L, and indulged in some hearty beer, homemade soft pretzels, spiraled ham, grilled brats and other sausages, and fabulous fall desserts (among other things). And then, C and L were generous enough to let us take home the ham bone along with some of the leftover meat. Chris had his eye on that bone all night, so he was delighted, and started trawling the web for soup recipes the very next morning. He finally chose the recipe for "Northwoods Smoked Ham and Bean Soup by Crock-Pot" from ICookbook, an app on his IPad, and as usual, we fiddled with it, adjusted it, and in an effort to avoid errands, did what we could with what we had.

This recipe has a lot of wonderful qualities. The best part is that this is a slow cooker recipe. That almost all of the work is done for you by that magical little machine, while you are at work, or wherever it is you go during the day. Which is made even more wonderful by the aroma that greets you when you come back from wherever you were. Plus the fact that you are probably tired from wherever you had been, and now dinner is already done. Oh, the fabulousness!

The ham was sweet, and we wanted a little smoky flavor, so we added a couple of dashes of liquid smoke. We decided against adding pasta, because we felt it was hearty and chunky enough with the beans, and neither of us need the extra carbs right now. It's definitely our kind of soup, similar to, but different enough from our Tuscan Sausage Soup or our White Bean and Leftover-Easter-Ham Soup. 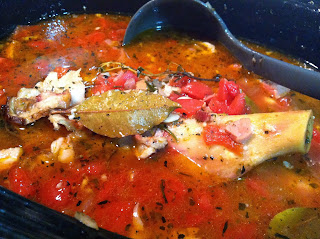 Heat olive oil in skillet over medium heat. Add onions and cook, stirring occasionally, until soft and fragrant, about 10 minutes. Add garlic and cook 1 minute. Place onion and garlic mixture, stock, ham bone, ham, tomatoes, parsley, thyme, bay leaves, liquid smoke, salt and pepper in slow cooker. Cook on low for 10 hours or on high for 6 hours. Stir in beans, and cook for about 15 additional minutes, or until heated through.

Hearty and flavorful, it was a perfect lunch, Thank you for sharing!