In a Rage over Ragin' Cajun

In Hartford is what used to be a fantastic New Orleans-style restaurant called Ragin' Cajun. The website suggests what Ragin' Cajun once was - "Hartford's home for authentic Cajun cuisine." We have been to this joint several times and have always left with our bellies full and our craving for Cajun completely satisfied. We have ordered fried turkey dinner from here before we owned a turkey fryer and loved it. We have raved about this place and the New Orleans-born Chef Tom Armstrong to anyone in earshot for years. And finally, last Saturday, we brought our friends and New Orleans natives PJ and Ceria there for lunch.
What a disappointment. Nay, an embarrassment. Ragin' Cajun isn't even a shadow of what it once was. We were barely greeted by a nearly silent server who never offered us drinks. When we ordered our usual favorites, Cajun staples like crawfish, alligator, and oysters, which are all over the Ragin' Cajun menu, we were told these items were no longer available. We browsed and pondered and ended up finding a few items that we hoped would please us. Then we waited.
The gumbo came first, with one spoon although we had indicated we wanted to share it. Thin, watery, greasy, and without okra, this was unlike any gumbo we'd ever seen. It was not a good start. Next came our entrees. We had talked up the place so much, and we were quite hungry, so we decided to order five entrees to share among the four of us. The fried shrimp platter, served with french fries, was a platter of seemingly pre-frozen food and was bland and plain. We would have been better off getting this at a fast food joint. The blackened catfish, served with mac-n-cheese and collard greens offered overcooked fish, mushy greens, and greasy mac-n-cheese. We requested vinegar twice just to give the greens some flavor, but our server never brought it. The BBQ shrimp platter was inedible. NOLA-style barbecued shrimp are fresh shell-on shrimp cooked in butter, herbs and spices to make an amazing dish that belies the word "barbecue" in the name. We're still not sure what exactly they served us (see photo below), but it looked like bad Chinese food and tasted worse. 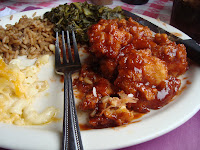 Red beans and rice, something anyone who has ever lived in New Orleans can, and does, make often? Forget it. Our plate was canned red beans, drained and rinsed and served over dry white rice, with not an herb or spice to be found on the plate. Seriously? The two sausages served with it were pretty good, we'll give them that. (We doubt they were made in-house.) 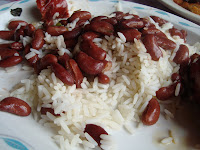 The server forgot the fifth entree (the barbecued ribs platter), realized she forgot, and had the cook bring out whatever he could. There were three ribs on the plate with the mushy greens and greasy mac-n-cheese. Three. Ribs. Come on. As we were leaving, we saw a guest with a full rack of ribs on his plate. He must have ordered the barbecued ribs platter. Indeed.
We waited about twenty minutes for our server to clear our dishes. Although we weren't particularly full or satisfied, we didn't dare prolong this agony by ordering dessert, and handed her our $100 Ragin' Cajun gift certificate. The one marked "Expires Never." Just to cap off our awful experience, she replied, "We don't take these anymore." How exactly is that acceptable?

To the folks at Ragin' Cajun, we say this. If you want to become one of those fried chicken-and-rib joints that can be found in most Hartford neighborhoods, so be it. But change the name of the restaurant. Reprint new menus. Stop teasing us with promises of Cajun food you're not willing to make. Chef Tom Armstrong, you should be ashamed of yourself. To call what we were served on Saturday "Cajun" is an insult to your skills, to all of Cajun cuisine and to us. You had an amazing thing going for a while there but you've let it fall apart. We won't be back. To PJ and Ceria, we're sorry we ever took you there and promise to make it up to you somehow. And as for you, dear reader, if you're in the mood for Cajun food, trust us and go elsewhere.
Posted by Amy at 9:30 AM

What a horrible disappointment! So sorry...