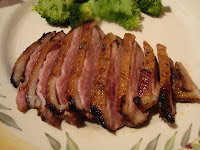 Duck. Rich, dark meat and crispy skin - one of Amy's favorite things to eat out, but we haven't really tried cooking in. When we saw a couple of gorgeous-looking duck breasts at our local butcher, we decided it was time. Many people are put off by duck, intimidated by cooking it or not wanting such a fatty protein, but our recipe (below) was quick and easy, and hey, fat means flavor, folks. And these had great flavor. (We served them with plain steamed broccoli so we weren't adding more fat to the meal. Everything in moderation, right?)
It was only the next day, poking around online, that we realized the mistake we made. Amy found a cooking tip written in 2007 by someone with the screenname "logicalmind" that summed it up best: "I find that placing the duck in an already heated pan causes the skin to brown before enough fat has rendered. Allowing the duck to heat from a cold pan renders much more fat and makes the skin crisp nicely...And a bonus tip, save the rendered fat in a pan and use it to cook some potatoes. Unbelievable." We had, unfortunately, heated the pan first (and it was a cast iron pan!) and had that exact problem - overly browned skin that wasn't as crispy as we would have liked, and little fat to use for cooking something else. So duck lovers, take note! (Note also that we made the adjustment in our recipe - what we should have done versus what we did wrong). 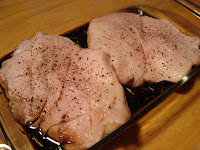 Ingredients:
2 duck breasts
2 teaspoons chopped fresh rosemary
4 tablespoons balsamic vinegar
salt and pepper to taste
Score the fatty duck skin with a sharp knife, taking care not to cut down to the meat. Pour the balsamic vinegar into a shallow dish and add the chopped rosemary. Add the duck to the dish, meat side down, and allow to marinate at room temperature for 20-30 minutes. Place the duck fat side down in a pan, turn the pan to medium-high heat and cook the duck until the skin crisps up (6-8 minutes). Remove the breasts and carefully pour the rendered fat from the pan; set aside for later use. Place the duck back in the pan, flipped so that the meat side is down, and return the pan to the heat. Cook an additional 7-8 minutes for medium-rare. When it is cooked to your liking, allow the duck to rest on a cutting board, then slice thinly against the grain and serve.
Posted by Amy at 5:43 PM

Congratulations on your first duck breast adventure in the kitchen. Thanks for posting that cooking tip.

Amy, hi hun, its Wendy! Tammy just told me about your blog. Luv Luv Luv it!! Remember that Chicken dish you made at Tammy and Chris's? You wrote the receipe down for me and I kept it but I lost it..I remember it was super simple. I remember you flattened the chicken and used Balsmic vinagar. Can you post that for me?

So nice now to have other cooks' tips at our finger tips.

I 100% agree with the cooking tips, however yours came out lovely and any minor adjustment would just add to the perfection. Beautiful!