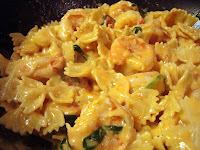 One recent afternoon, there was a package on the steps. We hadn't been expecting anything -  what could it be? It was addressed to us, attention "A Couple in the Kitchen." Hmmm...interesting. It was obviously food-related, and just in time for dinner! Hungrily, we ripped open the box and inside were two jars of Bertolli sauce, "Four Cheese Rosa" and "Arrabbiata," both neatly packaged with a letter inviting us to try them as part of Foodbuzz's Tastemaker Program. What could be more perfect on a hectic weeknight than a quick and easy pasta dinner? 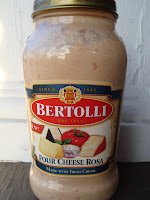 First, we decided to try the Four Cheese Rosa, an alfredo sauce made with Romano, Aged Asiago, Parmesan and Ricotta cheeses mixed with tomatoes. Then we rummaged through the fridge for ingredients we might use to make this into a well-rounded meal. We turned up a pound of frozen shrimp for protein and texture, a jar of sundried tomatoes for rich sweetness, garlic because you just have to have garlic, and some fresh baby spinach for a serving of vegetables and color. All of these, with a few shakes of red pepper flakes for a touch of spicy heat,  we thought would go well with the  cheesy, creamy sauce. We tried it. We loved it. While we aren't normally users of jarred sauces, we plan to buy more of this unique and tasty pink alfredo. It wasn't a just quick and easy dish, but it was simply delicious! Thank you, Foodbuzz and Bertolli!
Ingredients:

Prepare pasta according to package directions. While pasta is cooking, heat oil in a large skillet over medium heat. Add garlic and sundried tomatoes and saute until garlic is fragrant, about one minute. Season with salt, pepper and red pepper flakes. Add shrimp and cook, stirring, until shrimp just begin to turn pink. Add sauce plus one ladle of pasta water. Cook for 4-5 minutes, stirring, until shrimp are cooked through. Add spinach, stir, and immediately turn off heat. Drain pasta and toss pasta with shrimp and sauce. Serve garnished with grated parmesan if desired.
Posted by Amy at 5:08 PM

I was fortunate enough to have an ample sample--and I whole heartedly agree! It was delicious.