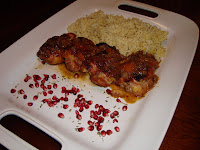 For the past few posts, we have been raving about what a great experience we had on our Afghani Food Tour. That experience has obviously stayed with us, because last night we made a dish from Cooking With Samia, the cookbook we bought from Tangiers International Market that was written by Nancy Samia Latif, the matriarch of the family that owns and runs the market.

One product in particular had caught my eye while I was browsing the aisles of Tangiers- pomegranate molasses. By chance, as I was flipping through the book yesterday, I noticed a chicken dish that called for that ingredient. The dish is called "D'jaj bi'l Dibs Rumman," or "Chicken Baked with Pomegranate Sauce" and it is amazing. We followed the recipe almost precisely, only adjusting the amount (we're cooking for a couple, not for twelve kids!), and we used dried herbs (for shame, I know). The chicken (we used bone-in, skin-on thighs) was cooked perfectly and was tender and juicy. The sauce was sweet and tart and made the house smell wonderful. We served it with basmati rice that we cooked in a rice cooker with a few shakes of ground cardamom, then we garnished the plate with some pomegranate seeds. Here's our slightly adapted version of Mrs. Latif's recipe. It's a great dish for fall, when pomegranates are in season.

Turn the oven on to 400 degrees. Lay the chicken thighs in a glass baking dish and season them with salt, pepper and a light sprinkling of hot paprika. Roast the chicken uncovered at 400 for 20 minutes. Then reduce the heat to 325 and continue to bake for thirty minutes more. When the chicken has only about 10 minutes left to cook, prepare the sauce. Saute the onion and garlic in the olive oil unti golden, stirring frequently. Add the tomato chunks and the parsley and cilantro. Simmer, covered, for about five minutes. Add the pomegranate molasses, stir well, and simmer for five minutes more. At the end of the roasting time, remove the chicken from the oven and remove the fat from the pan. Pour the pomegranate sauce over the chicken as evenly as possible, then return the chicken to the oven for ten minutes. Finally, place the chicken on the top rack and broil for 3-4 minutes. Enjoy with rice or another Middle Eastern side dish.
Posted by Amy at 1:12 PM