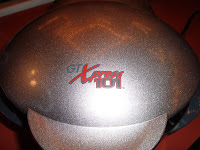 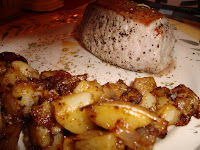 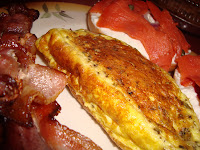 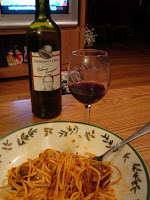 It was a rainy weekend and all we had planned was to do some fall cleaning and organizing. My own personal goal was not to leave the house for the entire weekend. With that in mind, on the way home from work Friday night, I bought breakfast supplies – eggs, orange juice, rye bread, etc, while Chris went to our local butcher and got some thickly-sliced bacon. And so on Saturday morning, we were ready to make our decadent hearty breakfast. I decided I wanted an omelette and prepped my kitchen gadget, the GT Express. You've probably seen the informercial on this one. I saw it and started missing my old Foreman Grill, so went ahead and ordered one online. Many negative comments have been posted regarding this appliance, but I like it and have had no problems with it. However, up until this weekend, all I’ve done is make beautiful, fluffy, perfectly shaped omelettes in it; I haven’t tried anything else.

Saturday morning’s omelettes were, as usual, fluffy and delicious. All I did was beat six eggs with ¼ cup of milk, then poured half of the mixture into each well. I put some cheese in mine, Chris did herbs de Provence in his. We let them cook for about 8 minutes and…well…perfection. They popped right out without sticking or breaking. I honestly can’t make a better omelette in a regular pan (and I cooked at a breakfast joint for two years)! After devouring the omelettes (and bacon, and toast, and of course, mimosas, and for Chris – bagels and lox as well), I had an inspiration and a challenge: any food we make this weekend has to be made in the GT Express. And so began our GT Express Weekend Quest.

For dinner Saturday night, we tried pork chops. These were from the same package of chops out of which we made our dinner a few nights ago, so it would be a great way to compare the grill with the GT Express. I stuffed my chop with a little bit of sage and walnut-sage pesto, seasoned it with plenty of salt and pepper, and put it in the left-hand well. Chris stuffed his with an herbed cream cheese and put his in the right-hand well. We let them cook for 10 minutes while I made some homefries on the stovetop. The verdict? Another success from the GT Express. The chops were properly seared on the outside, and on the inside, tender, juicy and cooked to a perfect medium. The wells didn’t stick, and cleanup involved one damp paper towel. So quick and easy! And we didn't even have to stand at the grill in the rain.

The following morning, we decided to make Pillsbury Grands. We did one in each well and shortened the cooking time to 6 minutes. These did stick a little bit and so when we did the next batch, we sprayed a bit of Pam on the wells. That did the trick, and our cinnamon buns were brown on the outside and gooey on the inside, as we like them.

On Sunday night, our final "Express" meal was spaghetti pies. I made a quick batch of meatballs and boiled some spaghetti during the day in preparation. However, when we were ready to eat, we just tossed the pasta in some spaghetti sauce, put a bit in each well, topped it with three meatballs and some cheese (mozzarella and parmesan) each, then a bit more spaghetti on top. We shut the GT and let it do its thing for five minutes. The spaghetti didn’t stick together as well as I thought it would, but it was hot and in some areas, nicely browned. It tasted great, but we both agreed we'd let it cook longer next time. We enjoyed our spaghetti "sort of" pies with Newman's Own Cabernet Sauvignon, and toasted the actor who had died earlier this weekend. Great wine, by the way.

Overall, we had some pretty good meals and great fun using our GT Express, and I can see us using it for more than just eggs in the future.
Posted by Amy at 6:00 AM